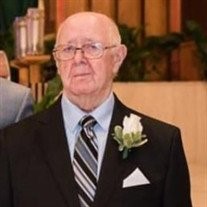 Robert A. (Bob) Scullion, age 90, returned to his heavenly father on June 8, 2020,  after an extended battle with Parkinson’s Disease, Dementia and Macular Degeneration. Bob was preceded by his wife Jane (Prosperi) Scullion and is survived by his previous wife, Patricia (Winter) Scullion.

He was a vibrant, sweet and well-loved father of five children and two step-children. To his grandchildren he was known as “silly papap”. He knew, loved, laughed and played with several of his nieces and nephews as they grew up.

Bob was an avid Pittsburgh Steeler, Pirate and Penguin fan as well as hunter and fisherman. He loved nothing more than a chance to sing or dance, especially Irish tunes.

Bob lived his life in Pittsburgh from birth until 2015, where he was relocated to Florida for medical reasons. He worked as a photo engraver for the Pittsburgh Press and Post-Gazette for over 30 years.

To order memorial trees or send flowers to the family in memory of Robert Scullion, please visit our flower store.