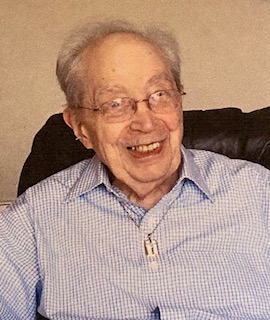 Age 102, of McKees Rocks, born February 18, 1918, husband of his beloved late wife Virginia, passed away Saturday, March 14, 2020, surrounded by his daughters Ginny and Patricia. He had seven children: Nancy, Pete(deceased), Patricia, Mark, Anna, Ginny and Joe, eight grandchildren and three great grandchildren. Marco was a WWII veteran who served in the U.S. Army's 300th Engineering Combat Battalion. He worked for the U.S. Federal Government and the Pennsylvania Crime Commission. After retirement he worked on a self imposed project to improve several roads in the McKees Rocks and Pittsburgh areas in order to save lives. Marco was also an accomplished Accordion player and held a black belt in Karate. He was loved and respected by everyone he met. He was devoted to God, his country and his family. Friends and family welcome SUNDAY, 2-5 p.m., McDermott Funeral Home, (412-331-3311), 1225 Chartiers Ave., McKees Rocks 15136. Mass of Catholic Burial, 9:30 a.m. MONDAY in The Archangel Gabriel Parish at old St. Mary's Church, Corner of Saint John Street and Church Ave., McKees Rocks, PA 15136.

To order memorial trees or send flowers to the family in memory of Marco A. DeLouis, please visit our flower store.