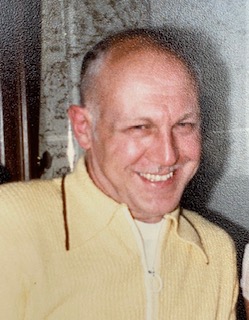 George graduated from McKees Rocks High School. Went on to local college to study Business Management for one year. Then, went to work at his father's dealership, Park Circle Motor in Stowe Rocks Twp., which sold and repaired Studebaker cars/trucks. Upon the death of his father, the dealership closed in the 1950's. A few mechanics went on to repair all makes of cars/trucks doing State Inspection and bodywork.

George re-opened Park Circle Motor and operated one of the "cleanest" shops and gained a reputation from dealerships around Pittsburgh as the expert on Problem Front End Alignments. After over 40 years doing repair work, he spent 2 years totally restoring a large RV motorhome. Then, after retirement; he headed off to follow his dream to see the USA with Donna, finally settling in Henderson, NV for over 19 years. He always talked about no more "snow shoveling" again.

Also, since an early teenager, he played the piano every day. By his 20th birthday, he had formed a 4 piece Polka Band. This grew to 6 band members known around Pittsburgh as the "Night Kaps". They played in local and "Afterhours Clubs" plus the Party Liners on the 3-rivers. His talent expanded from the Accordion to the Organ, plus mastering three other instruments. The band had a following in the S0's and 60's for their unique presentation of Hawaiian Songs. He always asked the audience, "What song can we play for you, so I can 'tickle' the Ivories to bring music to your ears"?

Family will receive friends at the McDERMOTT FUNERAL HOME, INC., 334 Forest Grove Road, Kennedy Twp., THURSDAY 11:00AM until time of service at 12:00PM.  George was a Korean War Veteran, serving with the US Army and will be interred with Military Honors at the National Cemetery of the Alleghenies at 1:00 PM.

To order memorial trees or send flowers to the family in memory of George H. Schneider, please visit our flower store.